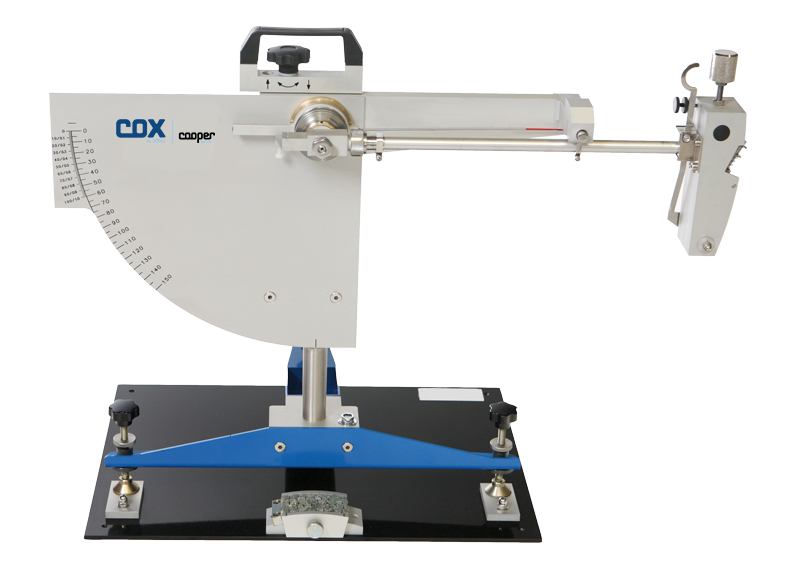 The Cox & Sons Pendulum Skid Tester CS-PENDULUM is the high quality skid resistance testing equipment. Originally designed in the 1940s in the US, the instrument was further developed in the 1960s at the UK Transport Research Laboratory for the testing of road surfaces. The CS-PENDULUM measures the frictional resistance between a rubber slider mounted on the end of a pendulum arm and the test surface. This provides highway engineers with a routine method of checking the resistance of wet and dry surfaces to slipping and skidding, both in the lab and on site.

It is based on the Izod principle: a pendulum rotates about a spindle attached to a vertical pillar. At the end of the tubular arm a head of known mass is fitted with a rubber slider. The pendulum is released from a horizontal position so that it strikes the sample surface with a constant velocity. The distance travelled by the head after striking the sample is determined by the friction of the sample surface. A reading of Skid Resistance is obtained.

Pendulum Skid Tester supplied by James Cox & Sons is easy to use and produces repeatable results.

Pendlum Skid Tester by James Cox meets all ASTM 303-93 requirements. It’s portable and very easy to use. The training support offered by the company is excellent.